Home | Blog | How companies of German and U.S. stock indexes use animated commercials for their business 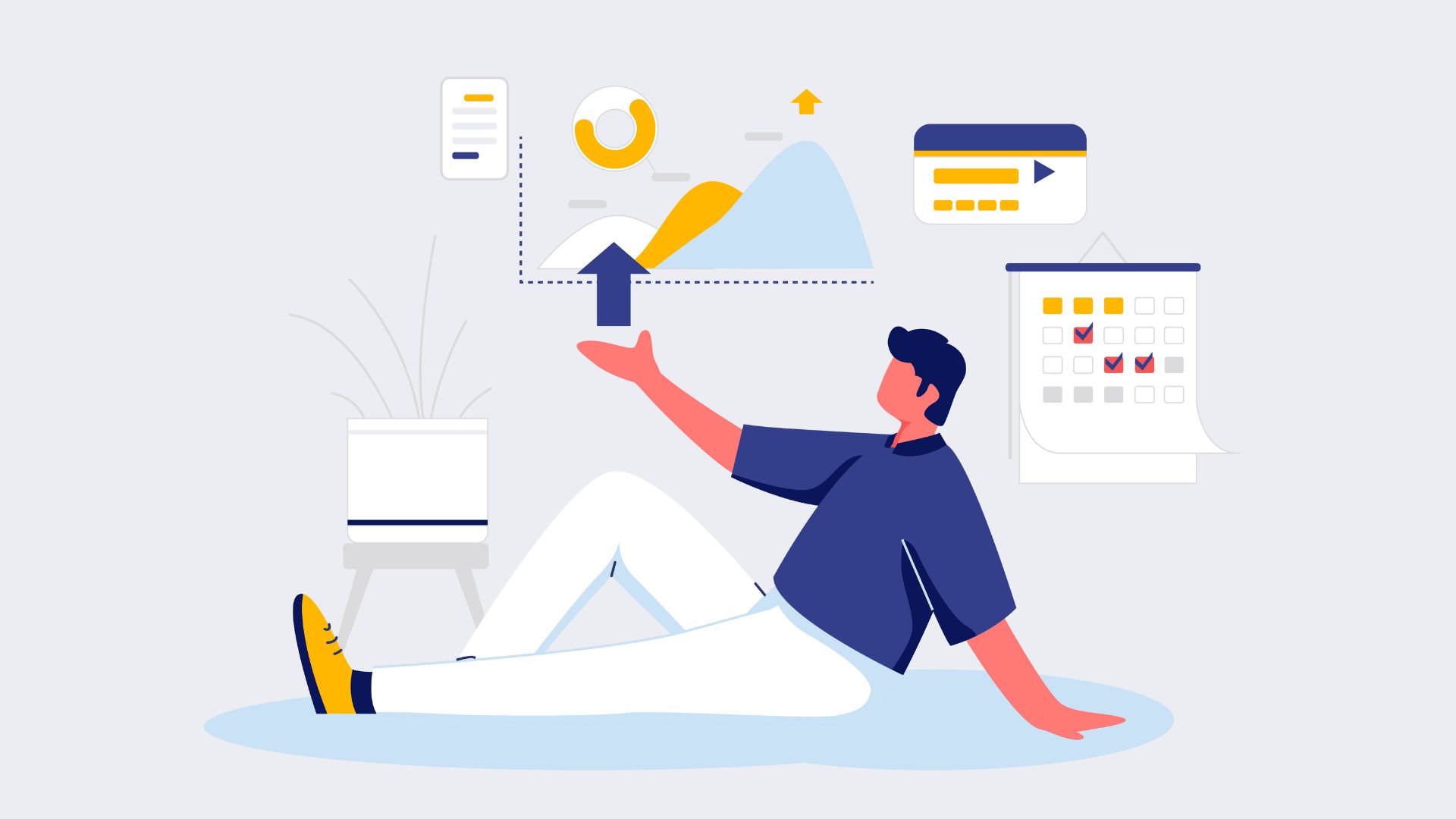 How companies of German and U.S. stock indexes use animated commercials for their business

You are probably accustomed to hearing about the variety of animation styles in connection to certain spheres: entertainment, food, flights, etc. Something that is always close to us anyway. We interact with these companies all the time, we see them on the streets and there are a handful of people that know nothing about them.

But what if we say that not only these famous brands use animation to showcase their products? What if there are rather “serious” guys on the market that find animation a perfect medium for their “serious” products?

“The DAX—also known as the Deutscher Aktien Index or the GER40—is a stock index that represents 40 of the largest and most liquid German companies that trade on the Frankfurt Exchange. The prices used to calculate the DAX Index come through Xetra, an electronic trading system. A free-float methodology is used to calculate the index weightings along with a measure of the average trading volume.

The DAX was created in 1988 with a starting index level of 1,163 points. DAX member companies represent roughly 80% of the aggregate market capitalization that trades on the Frankfurt Exchange.

Lots of numbers, huh? Well, we wouldn’t talk about this DAX thing if it weren’t for animation. Here’s the thing: most of these companies are using animation in the most original ways.

Who would have thought that we’ll be writing about the DAX index as a preview of great examples of animated videos!

“The DAX index, which tracks 40 large and actively traded German companies, is considered by many analysts to be a gauge for Germany’s economic health. The companies listed in the DAX are multinational concerns that influence the domestic German economy and the global economy as well. The success of these companies has greatly contributed to what is known as the “German economic miracle” or Wirtschaftswunder, a term that describes Germany’s rebirth after World War II.”

We invite you to learn how these companies are using animation, often more than once, to meet important dates in their history, to present their product, or simply to launch a creative campaign.

The focus of the campaign is a TV commercial in which long-standing protagonists Christian Ulmen and Fahri Yardim play the leading roles. This time, however, in a different appearance: the illustrator Ralph Ruthe has drawn them in his own style.

“MagentaTV stands for simplicity and great entertainment. We stage this message together with Christian Ulmen and Fahri Yardim in the form of cartoon elements. The reduced and at the same time entertaining drawing style is closely linked to the content of our campaign. It stands for how easy good entertainment can be with MagentaTV.”

Ralph Ruthe is a well-known author, musician, filmmaker and cartoonist who reached a large fan base through his series “Advertising parodies” on YouTube. “I’m a big ‘Jerks’ fan. And when Christian approached me with the idea for the MagentaTV spots, I didn’t think twice and was very happy to draw him and Fahri in my own style.

Dialogues between them arise spontaneously.

The TV spots are all about how easy good entertainment can be with MagentaTV. And that also applies to the two protagonists, who initially appear as cartoon characters. In their usual witty manner, they talk about how outstandingly simple everything is with MagentaTV. Then the “real” actors can be seen in the dubbing studio. There they give the animated versions their voices and evaluate what their animated doubles are up to.

Incidentally, the dialogue between Christian Ulmen and Fahri Yardim is always spontaneous. They are only briefed with a few key points that Telekom would like to have addressed. The rest is up to the actors.

The campaign is designed as a 360-degree communication, which, in addition to TV and online, also includes radio spots and social media ads. There are also print advertisements, posters, flyers, and mailings.

This is an amazing case: the company used interesting animation as an allusion to a famous cartoon called Jerks, and famous voice-over artists played a major role in appealing the video to German audiences. 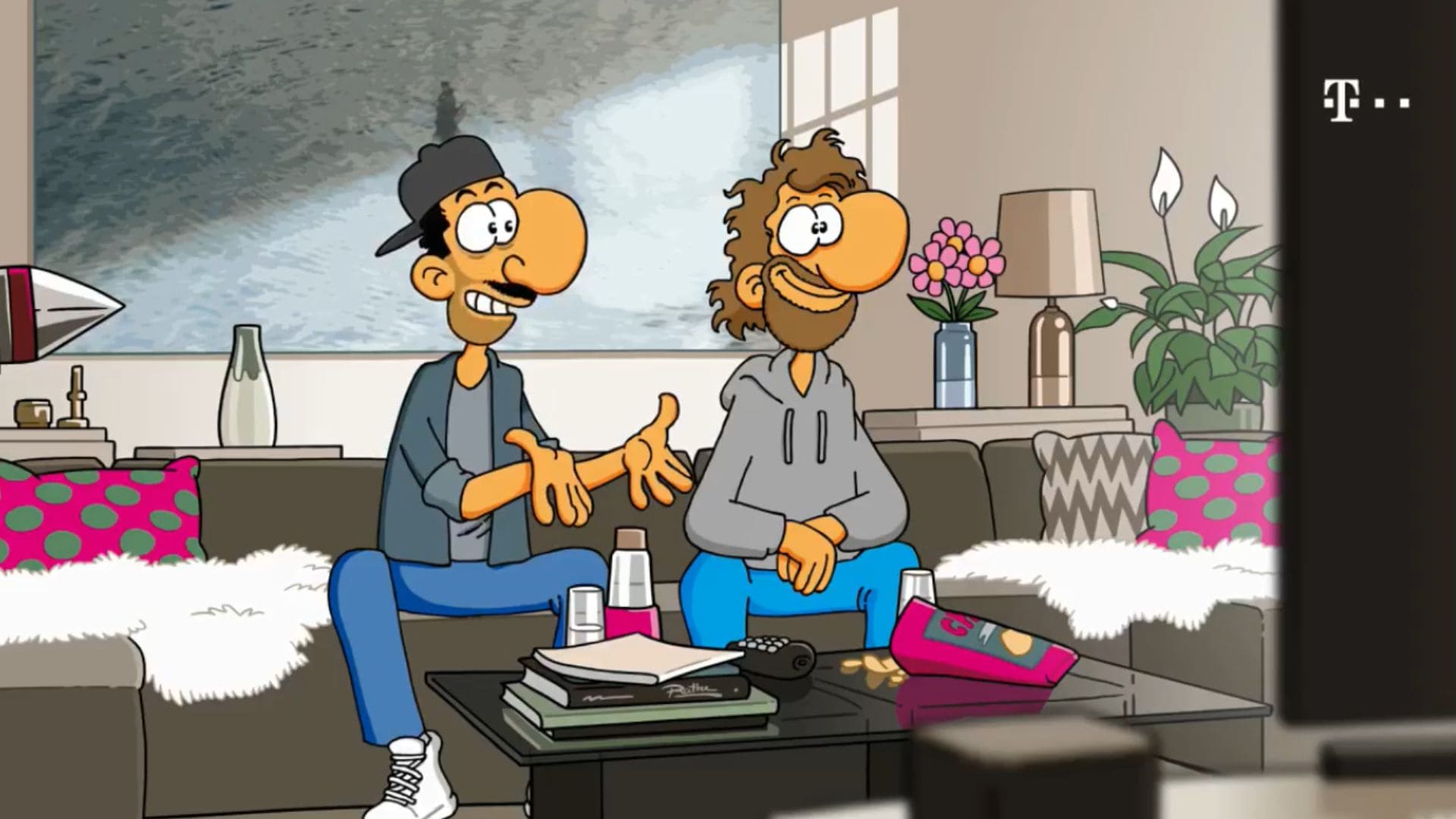 These guys made an iconic animation as a farewell to the Beetle – a classic Volkswagen car. This animation is one of our favourites, to be honest. Maybe it will be yours, too.

The campaign is anchored by a 90-second animated film that is set to Let it Be by the Beatles, as sung by the Pro Musica Youth Chorus. The car that many people love just because it represents sweet pastimes.

‘The Last Mile,’ created by Johannes Leonardo. By saying goodbye to Volkswagen’s most famous car, the video also shows commitment to the future: to go fully electric by 2050.

Another great animation is the ambiguous “Best performer”. Ambiguous is the best meaning of this word.

At the end of the wonderful video, we hear: “Best performance with VW service”. In any other context, we wouldn’t even emphasize this line. But in the context of DAX, it sounds like an allusion to a great yearly performance of the company. Anyway, just our musings.

The cars here are personalized like in the famous movie.

One more Volkswagen commercial we must tell you about. In 1972, Volkswagen needed something interesting to advertise its latest family vehicle: the four-door VW 411 sedan. So, they decided to use the character of King Kong — a giant monster — to sell the similarly large-sized vehicle.

If you even think about using a character for your commercial, think larger: it is a great example of implementing an old-time fictional figure in the commercial. And it really works.

The hard task of making it real took one of the era’s most talented visual-effects masters: Dave Allen.

Also one of the Dax best performers is Allianz. Their choice of animation is rather unusual, but still extremely interesting to look at.

Stop motion animation is less inventive in this case, probably than the videos of other companies in this list, but it works very well in capturing our attention. And telling a story.

If you step aside for a moment you’ll see this wonderful tendency: every video is an exercise in storytelling. That’s why many commercials worked that well.

“The most amazing thing for me is that every single person who sees a movie, not necessarily one of my movies, brings a whole set of unique experiences, but through careful manipulation and good storytelling, you can get everybody to clap at the same time, to hopefully laugh at the same time, and to be afraid at the same time.” – Steven Spielberg, filmmaker.

Well, the same pretty much goes for animation, too.

Mercedes is always associated with the class. No matter what, this company is on the list tops. When you are this successful, telling people about your history is a very important thing for brand awareness.

Actually, telling a story of a company is always an important step even if your company doesn’t have hundreds of years behind its back. Consider telling your story anyway.

Here’s a great, quite simple video Mercedes Benz used to tell their story.

Another video many of us in the studio consider to be a personal favourite is the Super Bowl Mercedes Benz ad.

Ooo, what a story! A very good reinterpretation of the Zenon paradox with the sudden discovery of speed by a turtle. The speed embodied in one of the Mercedes Benz cars, and such a decision might be obvious for many viewers, it still looks interesting.

The style of the animated video put an emphasis on the idea. Also, we can see very curious choices of storytelling features and narrative: competition, competitors, and power demonstration.

“The Nasdaq Stock Market (National Association of Securities Dealers Automated Quotations Stock Market) is an American stock exchange based in New York City. It is ranked second on the list of stock exchanges by market capitalization of shares traded, behind the New York Stock Exchange. The exchange platform is owned by Nasdaq, Inc., which also owns the Nasdaq Nordic stock market network and several U.S. based stock and options exchanges.”

There is an old choice, but we just can’t leave it with your attention. Old-fashioned animation that is always stylish. You can check our article on the subject of old-style animation and why it is still so appealing to us, by the way.

In the nutshell: old but gold.

Richard Williams is best known as the triple Oscar-winning animation director of The Thief and the Cobbler and Who Framed Roger Rabbit, as well as A Christmas Carol and Raggedy Ann & Andy: A Musical Adventure. He was born in Canada and is UK based. His book and DVD set The Animator’s Survival Kit is considered the premier textbook on how to animate.

It is curious to look at these videos now. If you think about it, these companies used animation way before it became as mainstream as it is now.

Okay, okay, not a “serious” company that handles finance or insurance. But still, Coca-Cola is always on the list we are talking about.

“In the start of an Emmy-winning campaign that would explore its own world for five more years, it is revealed that every Coke vending machine houses an entire world of bizarre species that go through heck and back to make sure the customer gets their happiness. Directed by Todd & Kylie at Psyop, with live-action by Peter Lydon at Hungry Man.”

Coca-Cola often orients on the animation and uses it a lot in commercials. This is one of the most famous animated commercials. Coca-Cola appeals to something like family values — basic values everyone can relate to.

Besides, they always based advertisements on storytelling. Literally always.

Another interesting thing that anyone who has a brand about Coca Cola is this: they work on the slogans. Here’s a list:

Also check out these advertisements: there’s a lot of inspiration here.

One of the advertisements worth of attention is made for BNY Mellon which is a part of the American Stock Exchange (AMEX) which is an American stock exchange situated in New York City.

But what is even more interesting for us is their animation on the site. Very modern, stylish, and simply cool. The very stylish way of talking about importance↓

This is rather an exception from our list. Ads can be a thing for something besides TV or the internet: they can be useful for presentations or conferences.

It is interesting to contemplate how such companies can’t deal without animation when it comes to entirely technical things. It doesn’t even have to be an entirely animated video.

As we see in most cases here, a gripping story is a key to transforming just facts about anything into a coherent narrative that will be able to tell something catching. Maybe it will be catching for years.

Storytelling in our times is the most powerful form of human communication. A perfect formula includes animation as a medium. Together these two can help you stay interested forever. Or provide interest.

The more interesting stories are on the way — stay tuned, we are about to tell you more.

How animation can make your commercial look tougher and more

How animation can shape and improve any marketing campaign