Home | Blog | Why animation has become the main medium of science? 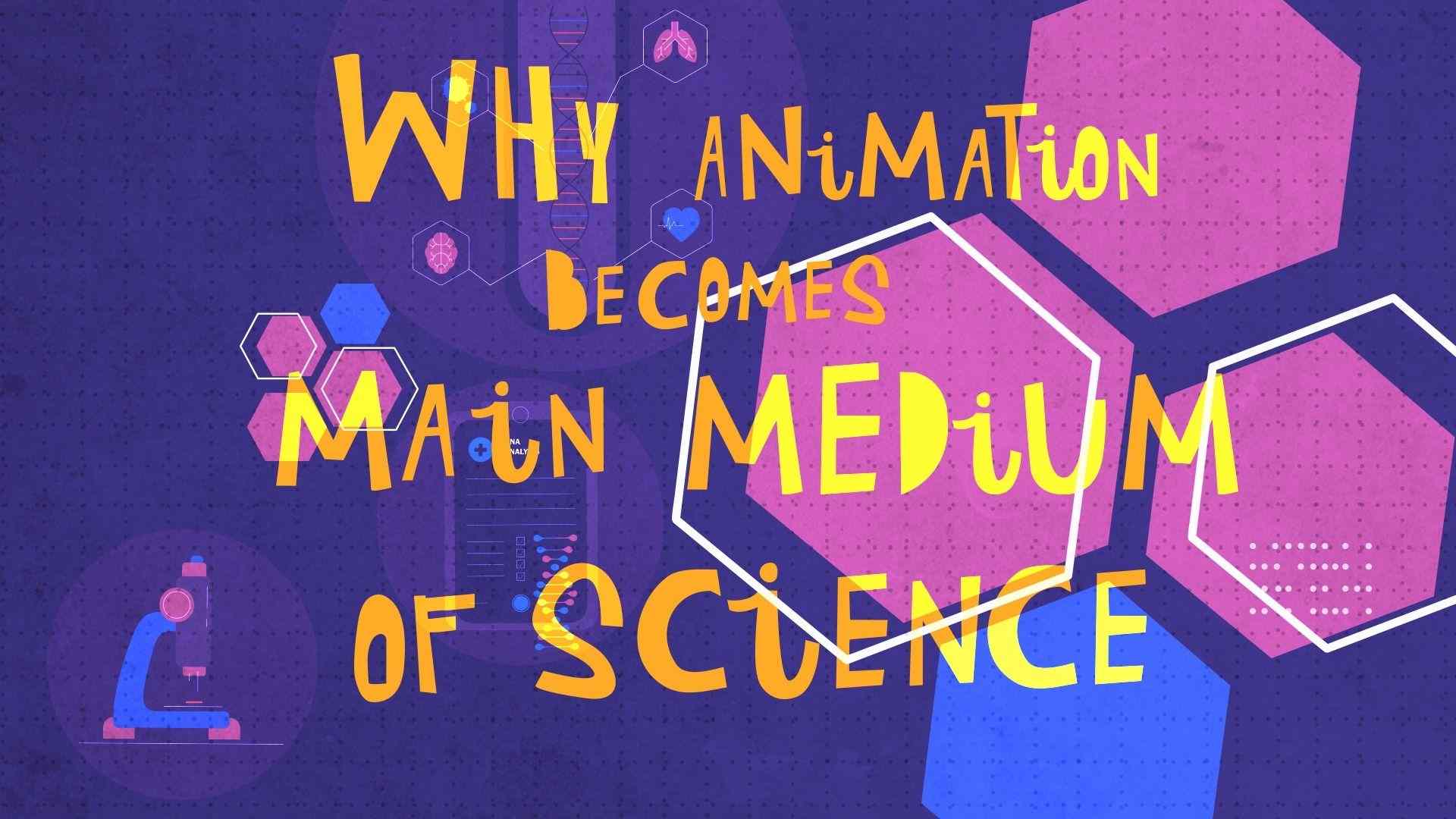 Why animation has become the main medium of science?

Over the centuries science has been building its honourable name by using many different mediums to share its great discoveries with a wider audience. Scientists, working in circumstances that are hidden from the publicity and usually hard to comprehend for those who are not involved in researching things, only presented the results of their works without bothering themselves with explaining stuff.

Things have changed in the last decades: science becomes increasingly closer to people that are not involved in such an activity. Why? People are becoming more interested in science than ever. Scientists, on the other hand, are interested in popularizing their fields.

And this mutual need in a factual information exchange about science has actually had a major impact on the way how many popular journals – and nowadays its youtube channels – highlight information of their research.

The best way to popularize and explain science is to show the processes and concepts visually. As it turned out, even for scientists it’s better to use animation in their works. How, exactly? Let’s dive into the whole topic immediately.

Where has animation been used?

If you think that animation is used only in videos that should be popularizing one subject or another, you are wrong. Let’s open Scientific American for a moment – at least half of the images that are related to physics, biology, astrophysics or medicine will be a piece from some video or animated visualization.

Weather forecasts are entirely presented through the animation because it’s easier to depict all the atmosphere fronts. Besides, many scientists that work in this area say with animation they feel like it is possible to reach an entirely new area in their field.

Tectonic plates and the changes they undergo are very hard to visualise without animation. Such animation explainers are a great way to show how the earth is changing right now as well as millions of years ago.

Besides, such spheres as DNA researches which are extremely popular and funded these days, or, for example, physics, is almost impossible to imagine without animation. Animation helps to illustrate extremely hard concepts and processes in a form that is easily digestive for those who don’t have special knowledge.

And, what is the most urgent is medical animation. Or, to be even more precise – a great many videos about COVID-19.

Also, to explain what sort of solar system happened to be a home to all of us, planetary scientist James O’Donoghue, a member of the Japan Aerospace Exploration Agency, turns the complex physics of our solar system into extremely vivid animations.

It is popular to say nowadays that an overabundance of pictures in our daily lives is the thing that remains in the short-term memory and reduces attention span.

However, a science animated video is aiming for another goal – not only to straighten the quality of remembering information but also to explain what is hard to get. If you think about it, the animation itself has many qualities of the scientific method.

The animation itself is science

It’s not an exaggeration, you know. Why? The answer is very simple. Animation intersects with science in practice. For example, in order to draw believable characters, animators have to know comparative anatomy, how the body moves, the basic principles of physics, the imaginary details of the body had to align with its real examples and so on. In animation, you can not just draw something, but you have to follow specific rules.

Drawing pictures has always been one of the most powerful tools the scientists have used practically always. You won’t be able to find a time period where scientists would intentionally deprive themselves of such a tool, and, to be honest, if such a pleasure.

Not only it helped them to understand the subject better, but also to go the way nature went – line by line, detail after detail.

It is also well-known that many scientists have been moving from their fields (maybe, just for a while) in order to commit themselves to bring the science they know into the science of animation. For example, Ron Henderson who was a faculty member at the University of California worked with DreamWorks Animation to explain something called “Bubble Science”.

Animations, obliviously, are very efficient aids for teaching dynamic events in science. For example, many studies have shown that those students who at least partly were learning biology through animations, obtained significantly higher test scores than the group of the students that only read the articles or saw the stable pictures.

Students themselves say that it is easier and more enjoyable to learn science through animations as a change from reading text.

Since any scientific subject is at least partly a visual subject that consists of many events. Animation helps to provide a clear picture of complex ideas and processes.

We can see lots and lots of animated videos that explain how the human body works or show us the miracles of the universe. That’s not surprising at all. 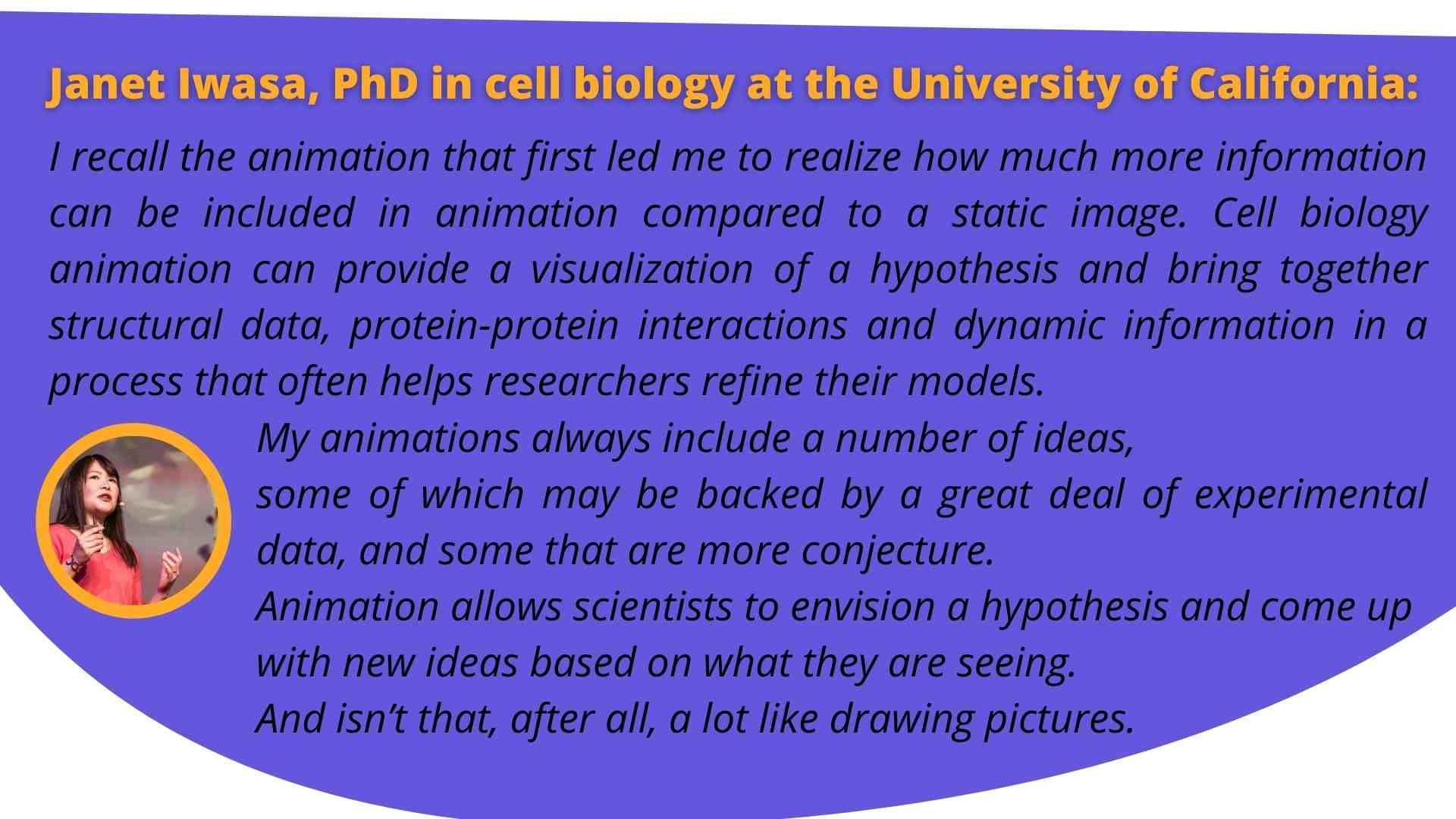 Certainly, education even in the closest future will experience the impact of visualization. Many universities are already working on their own textbooks to explain biology and physics through science animations.

Types of animation in science and its possibilities

3D animation. It’s catchy, carries pathos, and is a great mood medium. It’s destined to hasten you out of the view that is limited with details and acquaint you with the world of shapes, forms and lines. 3d animation models and shows what we can’t see – atoms, molecules and a great number of hidden things inside other entities.

2D with 3D models. 2D animations are perfect with 3D models because it allows many possibilities 2D can’t provide on its own. Together the storytelling capabilities of 2D animation with the 3D features can help you achieve great results.

Whiteboard animation. Probably the best style for a proper science explainer video. It doesn’t take a lot of time to create something like that and its efficiency is basically perfect. You can’t complicate anything with this tool.

If your goal is to explain a scientific fact process or a concept to a non-specialist audience, choosing whiteboard animation is the best choice. 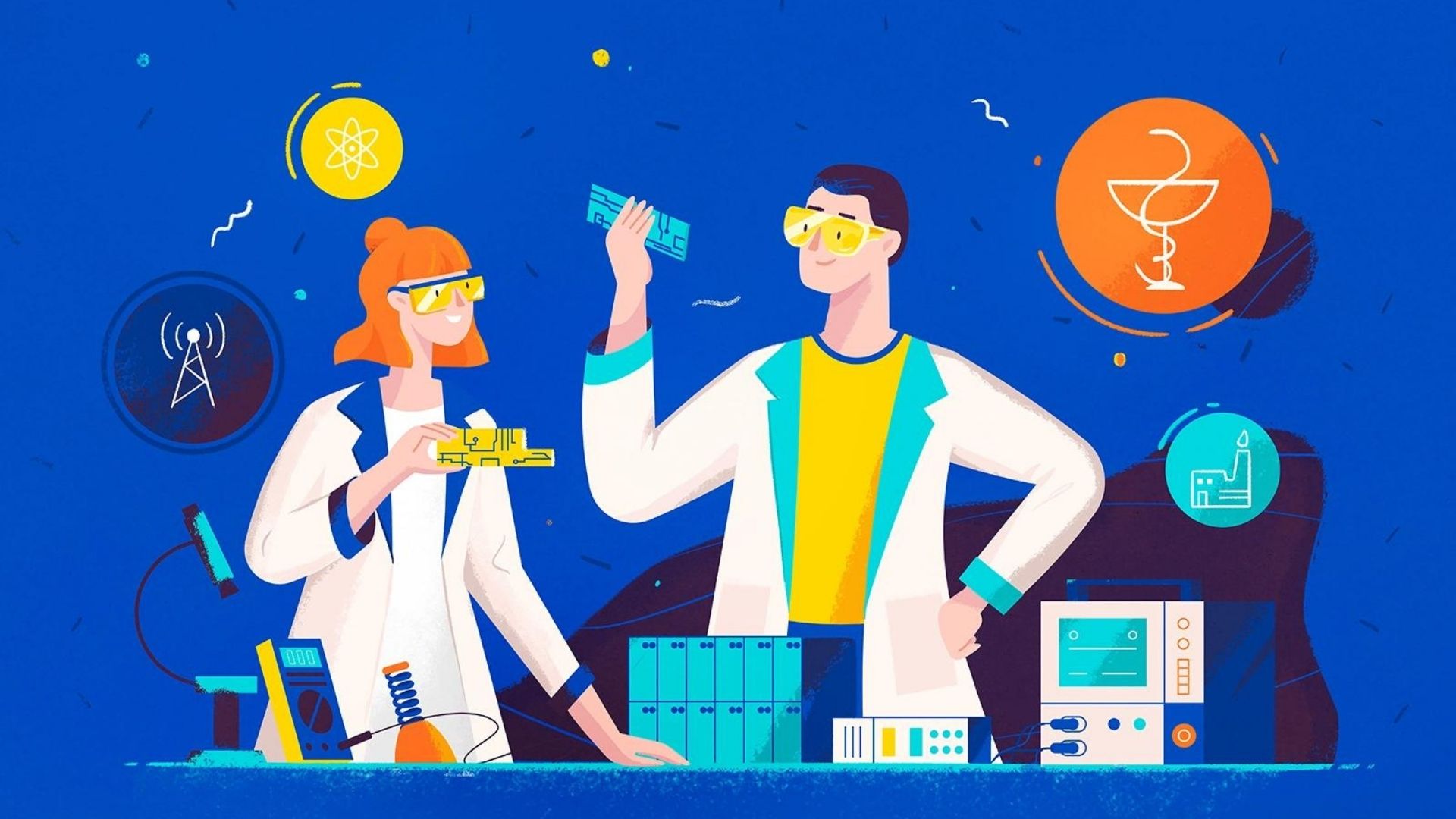 Vehicle of virality for science

The last hype that happened to be in science is not even about wonderful discoveries of the latest Nobel winners, but all the same – about Covid and its doppelgangers that increasingly appear in different countries.

However, the main viral video on the subject remains a clip made… by scientists, of course.

Global organizations, such as Unicef, also did not choose to stay aside.

Such science explainers help to reveal completely novel truths over a very short stretch of time.

Partly thanks to such cases, animation in science is growing into different types of the genre. For example, did you hear of “molecular animation”?

It is a rapidly growing field that seeks to combine the illustrative power of animation and biology. Complex lives of the sells are now recreated in their vastly detailed existence in animated videos.

The field has also given a great push for a new type of artist – scientist-animators that possess an understanding of the topic are capable of creating tools to show the processes to the public.

From Sci-Fi to Science and Back

We used to associate animation and science with rather futurology-kind-of- genres that depict the future, but not always scientifically accurate because there are lots of artists’ approaches to a product, so to speak.

Well, as you know it took a twist and now science in its specifics is what people want to know.

However, it has an impact on Sci-Fi movies. Nowadays, if you are working in this area, you have to be scientifically correct. Or at least explain what is the logic behind your setting. 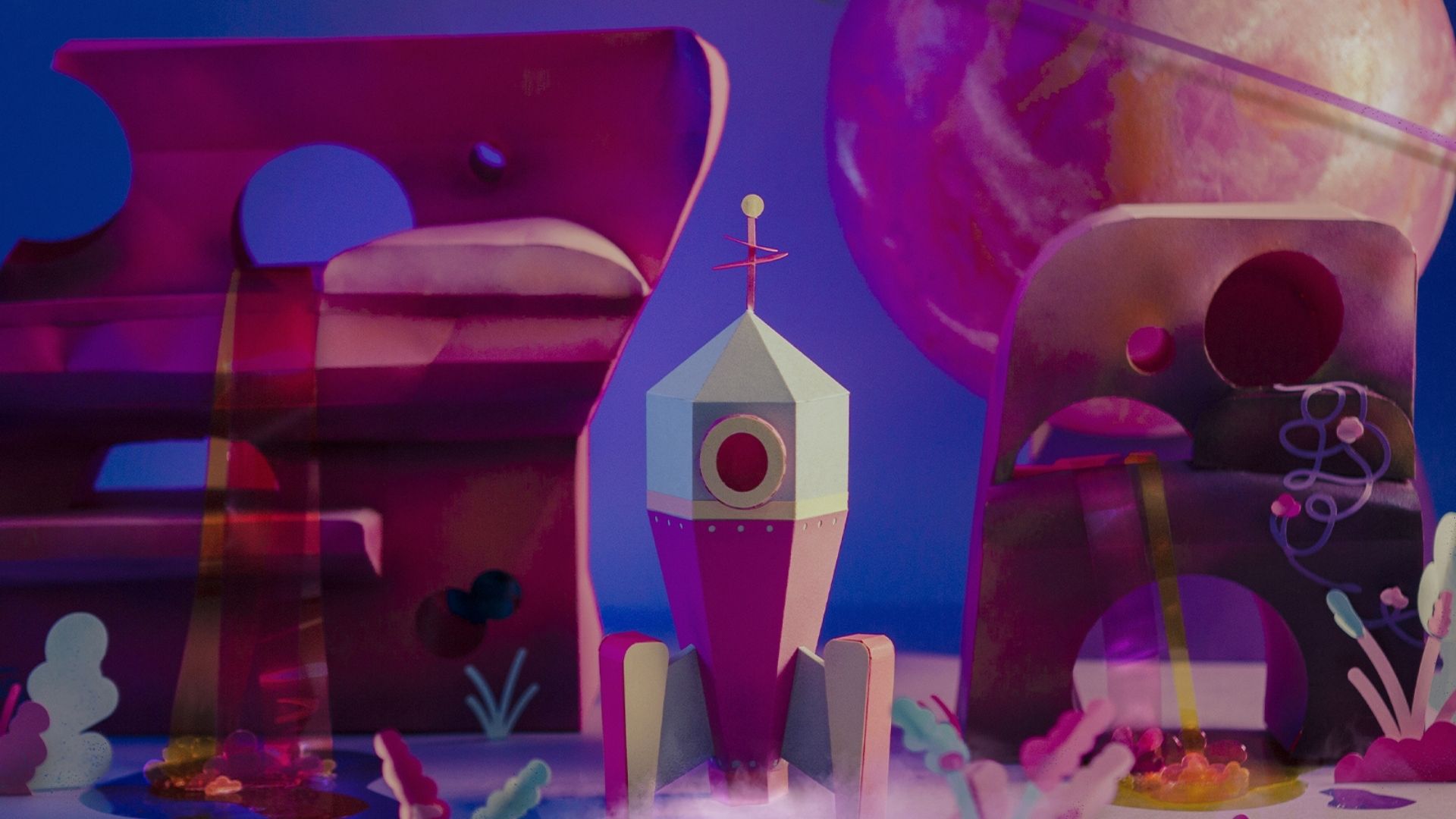 Animation, in the best sense of this word, is contagious. Its ability to simplify the subject and find another dimension in order to explain it is wonderful.

Many people claim today that their first real encounter with science – at least the one that deserves to be called “conscious” – happened thanks to some animation science explainer. Considering the fact that more and more animated videos are now part of educational content in schools and universities, we are hoping for better outcomes.

Would you like to depict the reality of a scientific concept through a well-made animated video that is capable of slowly guiding a viewer through the wonderful complexities of any idea you have? Well, it seems like a task we love to complete! Contact us to get scientific animation for any purpose you may have 🙂

10 mind-blowing MYTHS about the Coronavirus (COVID-19)

That’s right. Science is complex. Nothing is as simple as a video.

There are good opinions. Not bad.

I love meeting such enlightened people on the Internet. This blog is just a godsend for me!

Successful examples of animated videos really made me believe in the magical power of animation to tell complex stories) Seriously.

Where did you get such unusual templates for quotes? Really created independently?

I must admit, you design your content very well. Articles are not only pleasant to read, but visually everything looks good.

It’s high time to modernize science! Everything is said correctly.

These opinions have a right to be.

A good article on a complex topic. You handled it very well.