Video marketing tends to change quite often these days. Lots of these changes are taking place unexpectedly, making brands to keep up with them. In regards to this, we should say that when something is altering its look in the marketing, it certainly makes viewers’ experience more vivid.

As video increases in popularity along with the platforms that are hosted, the formats of the video evolved, too. The vehicle of this transformation is not the content of a video. Due to the increasing number of platforms, social media, and web sites where video can be shared or posted, people often order modifications of video clips into different formats.

People used to order video clips to explain an idea in 30 or 60 seconds. One version of the video was enough to explain one idea, and no variations of this was required. It is barely the case now when you need to keep your activity on several platforms and share unique content regularly. Recent dynamics in marketing have made it clear that the interaction between the audience and the brand is going through several leading social media. 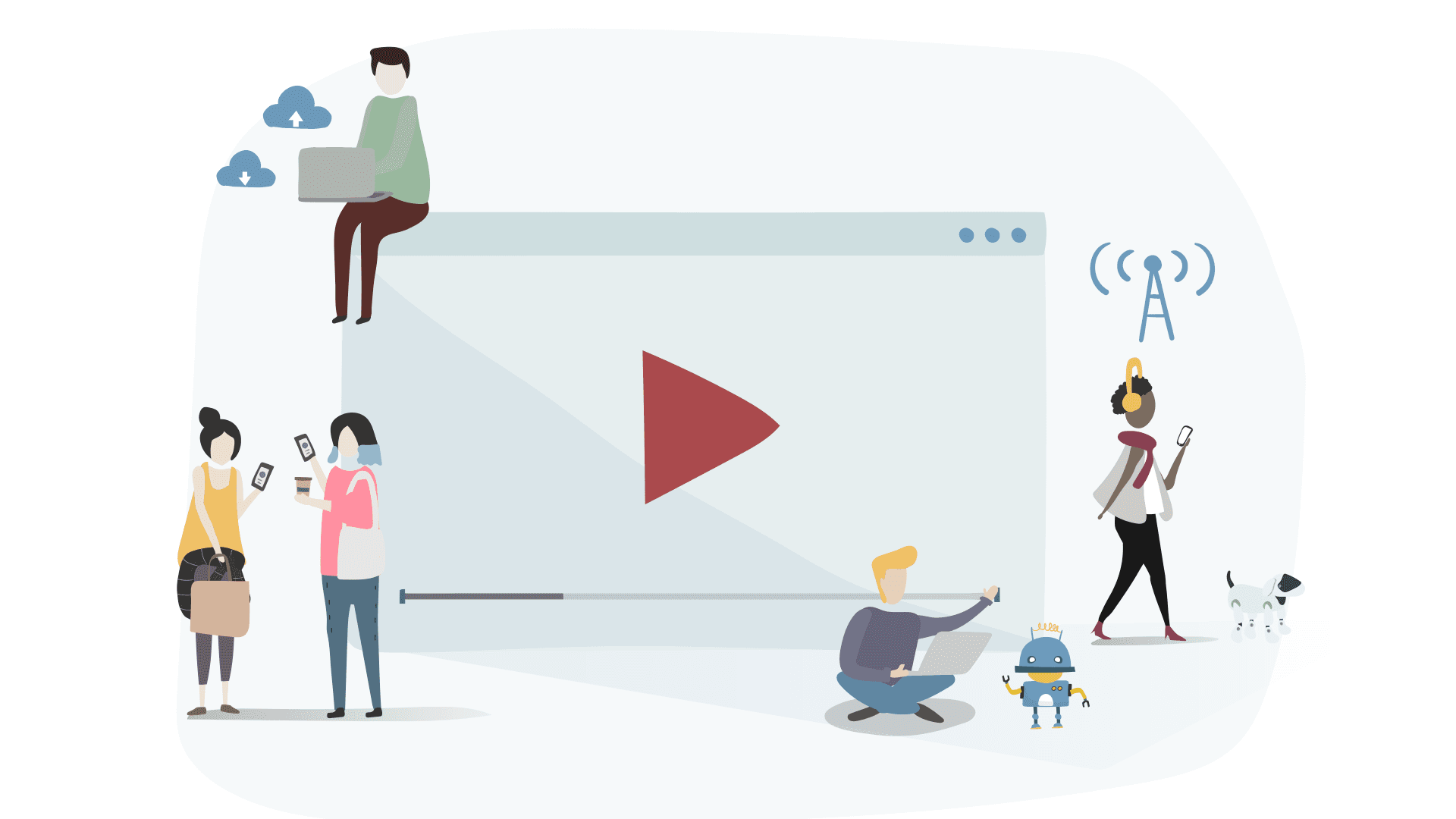 Video is getting engagement all over the internet, and this means that the audience is diverse not only geographically speaking, but considering the devices they use. Brands should think more extensive than ever and calculate how to make a meaningful brand message available on the most visited platforms or the screens. Everything can affect the ways video should be shaped. It is safe to assume that format is a transitional tool between the brand and the audience.

For example, if you want to find your audience on YouTube or to be found by them, you have to make a video accordingly to their requirements. Therefore, if you have a video that does not fit in, you have to order the modification for it.

In the past, the only place where the changing of formats where required was the only TV. It’s not strange, because the TV was the only place where video existed. They had and continue to have very specific demanding to the videos they will air. By contrast, it has even more different formats today, because the internet has a huge influence on the shows that highlighting on the TV. Today, however, a video covering 70 to 80% of the internet traffic according to different studies.

The most popular social media platforms, like Facebook, Twitter, Instagram, LinkedIn, YouTube have their requirements to the format of video channels or users can upload. We can credit them for the inventions of new formats and increasing the number of unique types of videos people can see and share. In an effort to articulate the vital message that your brand represents, it’s better to use most of them or even single one of them. Many new kinds of formats that video clip takes shape, ensure the best possible experience for the audience.

What kind of format adaptations are there?

The binding principle of any required format is the size. It represents a unique vision that is natural to a particular platform. The size is a widespread reason why would brands turned themselves to a studio and ask for their services. The variety of sizes is quite diverse, and often it is impossible to make a video that will fit at least several of them. You are always going to need resizing.

Sometimes client order the adaptation of the video to specific languages. International companies that are work for the audience without specification on the country need to be understandable on all the popular languages. Some companies even want to expand their geographical representation, and they find no way better than to be available in different languages. Sometimes it’s the most spoken European languages – English, German, French, Spanish or Russian. In other cases, clients can ask for Arabian or Asian languages, including most exotic ones. It is a typical approach to order from a studio a video adaptation on several or even dozens of languages. Few people would argue the great impact such a modification of a video has.

Modern internet space is full of people’s idiosyncrasies that became a common way of behaving online. One of these things is the tendency to watch videos silently. Well, not every video is fit to be viewed without sound. The other way to adapt video is required here – to make it silent and add subtitles. Of course, initially, you would order a traditional video, that includes professional voice over, music, and lots of other background sounds that are as critical to the video as visual aids. But, as has been said before, today, people often watch a video without any sound. That’s why many companies have an urgent need to receive a version of a video that still has sound, but that will not lose anything if the user would watch it soundlessly.

Another way to adapt video is a short version of the longer video. Let’s say there is a video that lasts for a minute. It includes everything common video needs – explanation of the matter, basic story structure, and so on. If the company wants it to be played as a short advertisement, they need to make it shorter without losing the point. How to capture these vital core into a much shorter video? A studio would have to write a new script.

A popular request is to make two videos simultaneously. One version of the video is original. At the same time, a company would make a version that lasts 30 seconds and even a shorter one, 10-15 seconds long. The reason for that is extremely plain: one video in the current video marketing situation is not enough. If a company is making only one branding video, it could eventually trail off into futility or gain too little attention. That takes us to an interesting conclusion: one frame to tell a story is too limited. When the same story (embedded in the video) exist in a variety of forms, it made the message more complete.

All of these modifications applicable not only for a live video but to animated video content as well. If you are making an animated video, the requirements of hosting video platforms are not changing.

Instagram is one of the most visited social media that slowly becoming more video-oriented that it originally was. A few years ago, Instagram was a simple app for posting images only. Today no one can call it “simple” because Instagram has become a real social media platform. It has specific requirements for all types of video you can post – stories, IGTV, and video for posts. To fit these requirements, you have to resize the video to the so-called square format – 1:1, which is justly associated with Instagram. Videos that have been made outside Instagram are not suitable for this social media because of the format. Since brand video is virtually any video that is made under a specific company, the quality of the Instagram videos is a vital portraying of the brand image.

Stories are supposed to be in the crop format 9:16. It is a portrait orientation. If the image is appropriate to be seen in the landscape frame on the phone, the 16:9 format is what you need.

IGTV oddly doesn’t need something different when it comes to reshaping it. Its size is not the same though, because IGTV was designed to hit new length that is possible to post on Instagram. So, the size has to be kept under the 650 Mb limit. The video dimension is 1028×1920, but the frame is the same as for stories – 16:9 or backward.

Why would companies need to resize a video to Instagram format? Quite often, they ask a studio to shoot a video specifically for Instagram; in other cases, an existing video has to be changed to fit Instagram’s requirements. Instagram is a critical marketing platform, so any brand needs to mark its presence in this social media.

Facebook, for a long time, has been a source of occasional video content. They are no strangers to stories, too. It is pretty much the same thing as we know from Instagram. The ideal frame is 16:9 for landscape, 1:1 for square.

The recommended format for Facebook video is MP4 or MOV. The frame rate is 30fps. The other formats also available, but it is hard to ensure that the experience of watching a video through them will be as pleasant as possible.

If you have content that will be good looking in a 360 video format, a 2:1 aspect ratio is what you need. The maximum frame rate that has been set by Facebook is 60 fps.

For such a thing as In-Stream Video Ads, Facebook require a square video frame; the recommended size is 1280×720 pixels. For Facebook stories messenger ads, the ratio is 16:9.

Facebook is not entirely oriented on video content, but the number of it increases with every year. Marketers predict that in a few years or even less, video content will be a prevailing party among other types of information on Facebook.

Twitter is a mobile-friendly platform, or, to be a more precise, fully mobile-oriented platform, and the videos should be optimized for a variety of mobile devices. Twitter’s most popular sort of content is horizontal video. The recommended size for it is 1280×1024 pixels. Ratios are between 1:2.39 – 2. 39:1.

Vertical videos (1200×1900 pixels) minimum size is 32×32 pixels. MOV format is the best for watching experience from mobile; for the web, MP4 will be better.

On twitter, the maximum frame rate for a video is 40 fps.

For marketers and brands, especially important, are YouTube video ads. There are two types of these: skippable, the option is available after 5 seconds of watching the ad, and unskippable. Quite often, companies order video specifically for such a purpose. There are no requirements that differentiate these ads from other videos on YouTube.

LinkedIn supports many formats from AVI to MKV with a maximum frame rate of 60 fps. Video ads on LinkedIn required specific audio format – AAC or MPEG4. The size of it should not be more than 64KHz. The supported ratio is 1:1.

TikTok app quite often appears as a part of a digital marketing strategy. It is in many respects as necessary as Instagram or Twitter if you are running TikTok videos specs are the following ones: permitted both vertical and horizontal types, but the first one is more popular. The ratio is 9:16. 1080×1920 is the preferred size of the screen.

Video format might look like something of little importance, but it has critical meaning. Platforms are not hosting videos that don’t fit the requirements set on the site. This is the way for them to take care of the viewer’s watching experience and leave their creative mark on users’ content.

A social media video is a tool that is impossible to ignore if you have a brand. It’s a way to hit a new rate of conversion and attract more people to interact with your company.

This is a certainty: no brand can build a proper image without a variety of video formats. One stable marketing approach has become an anachronism, because in the marketing video – the leading form of marketing today – one message needs to be present in different ways.